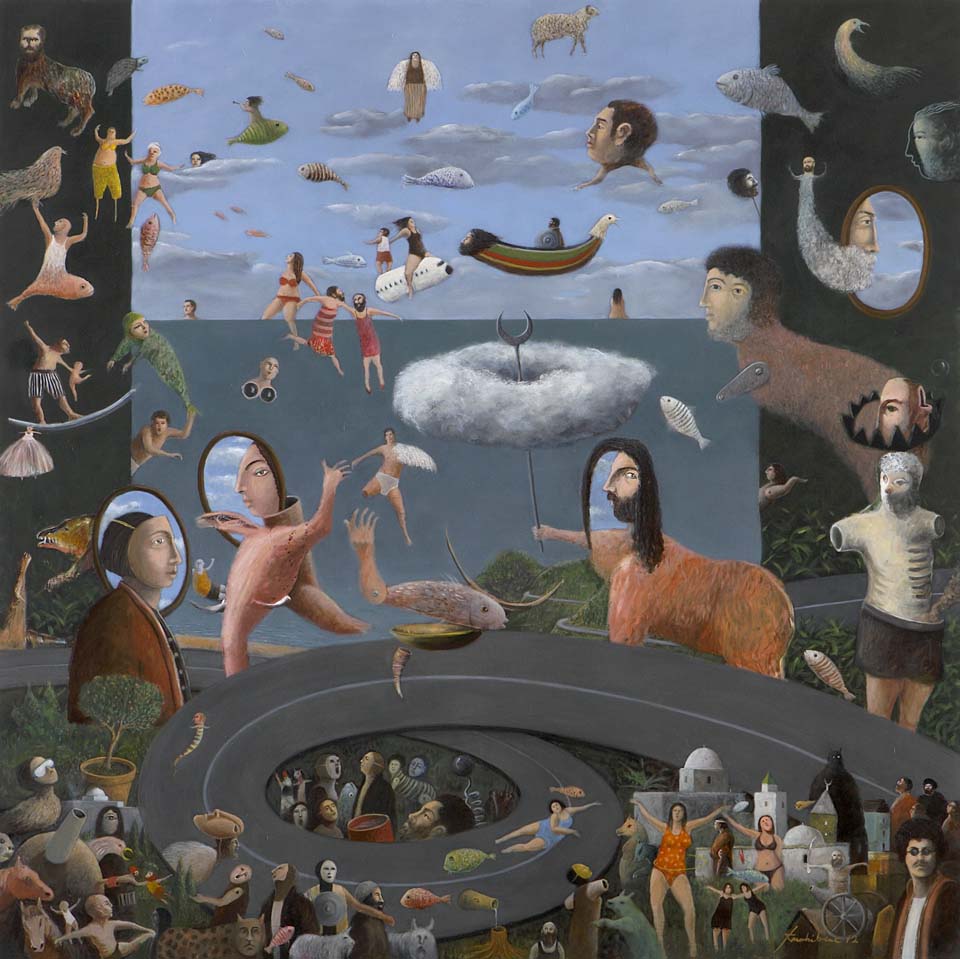 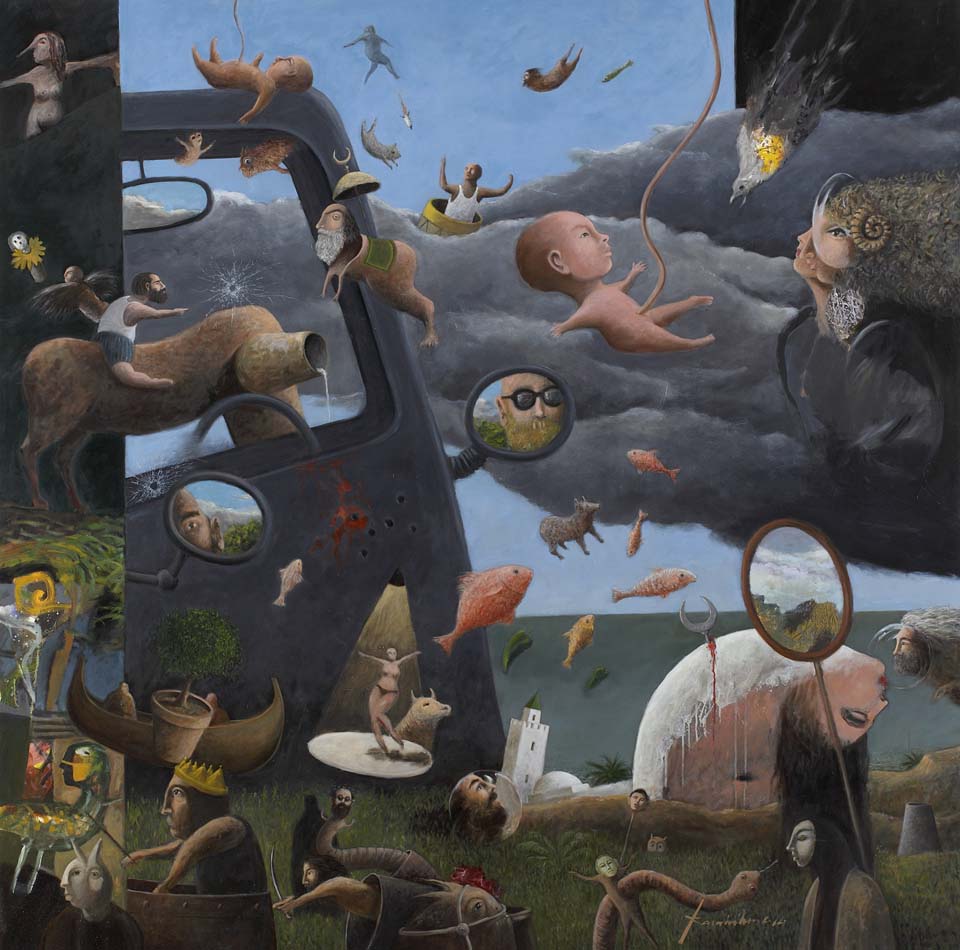 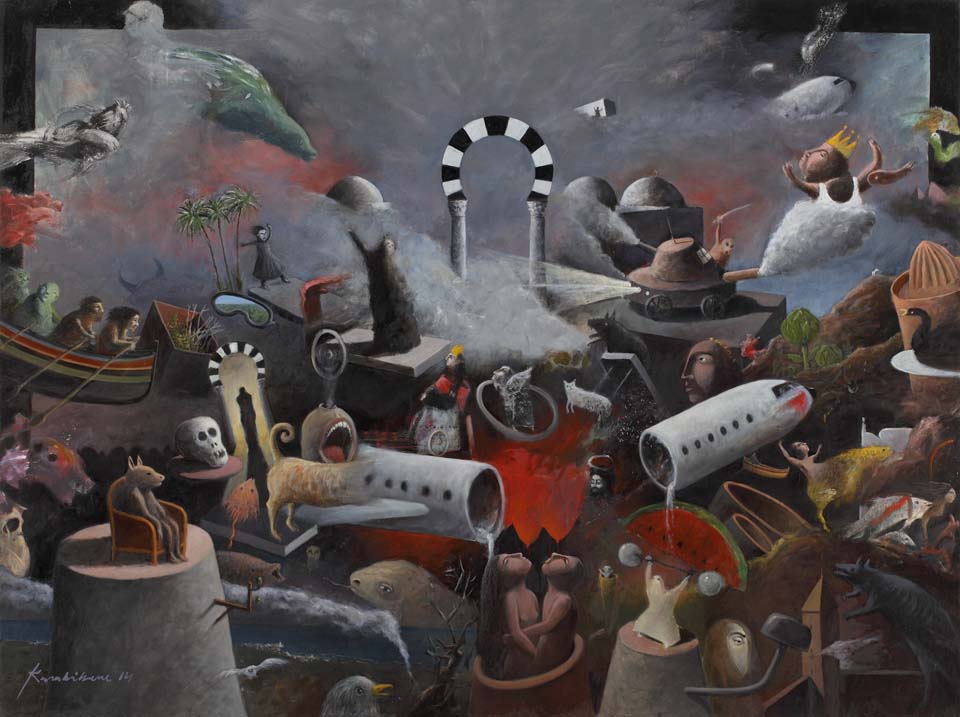 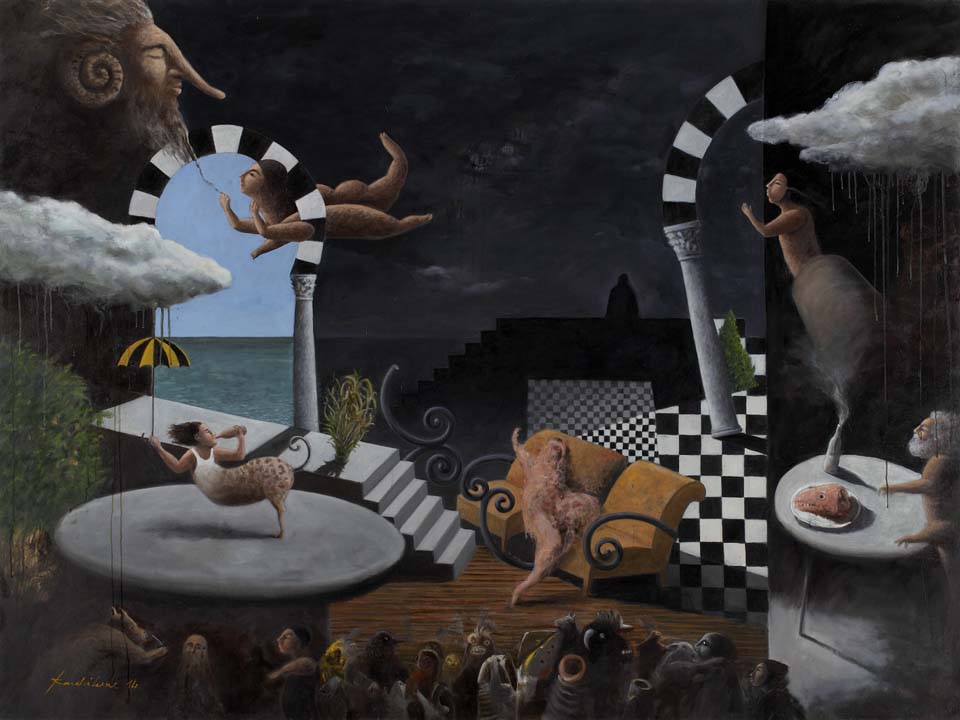 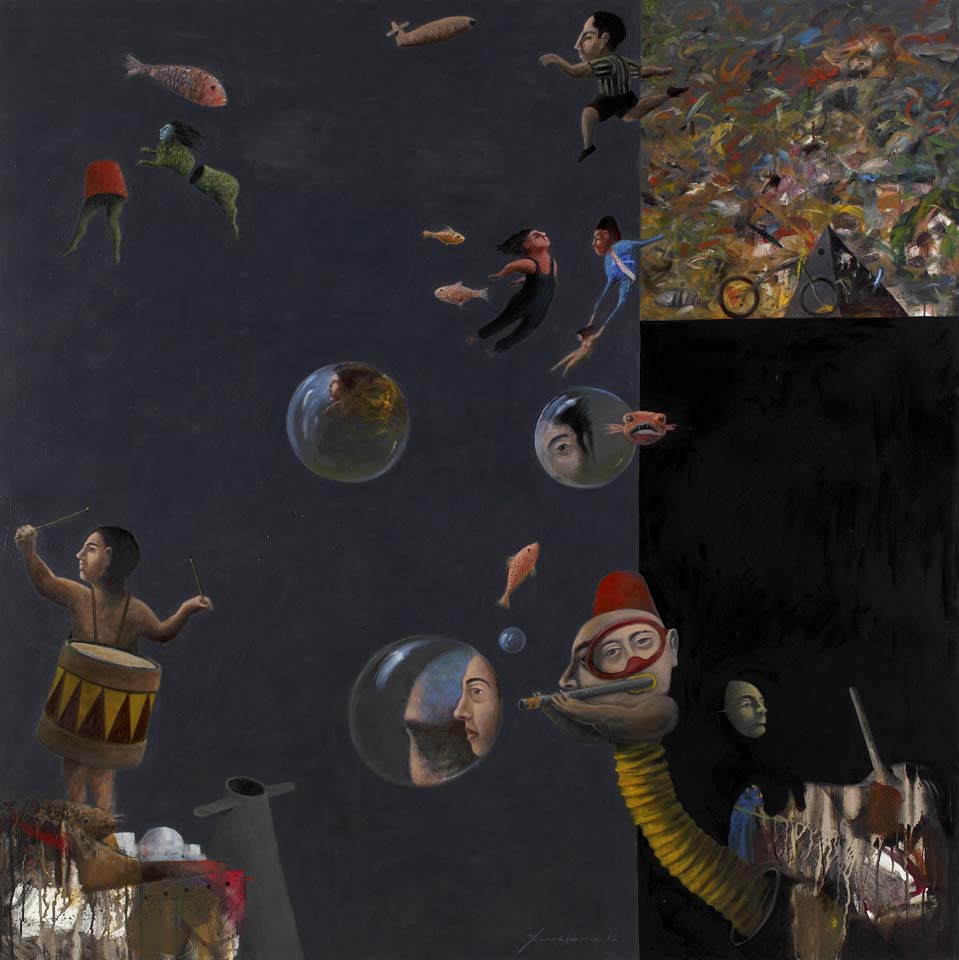 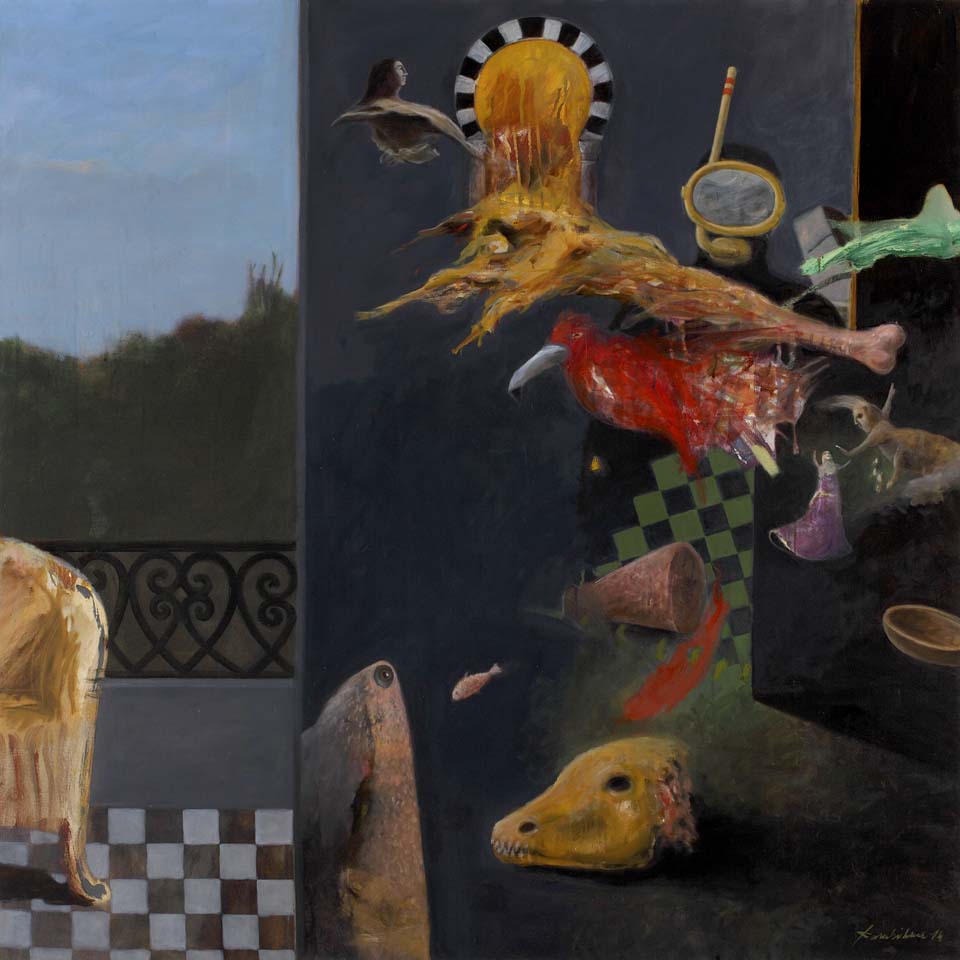 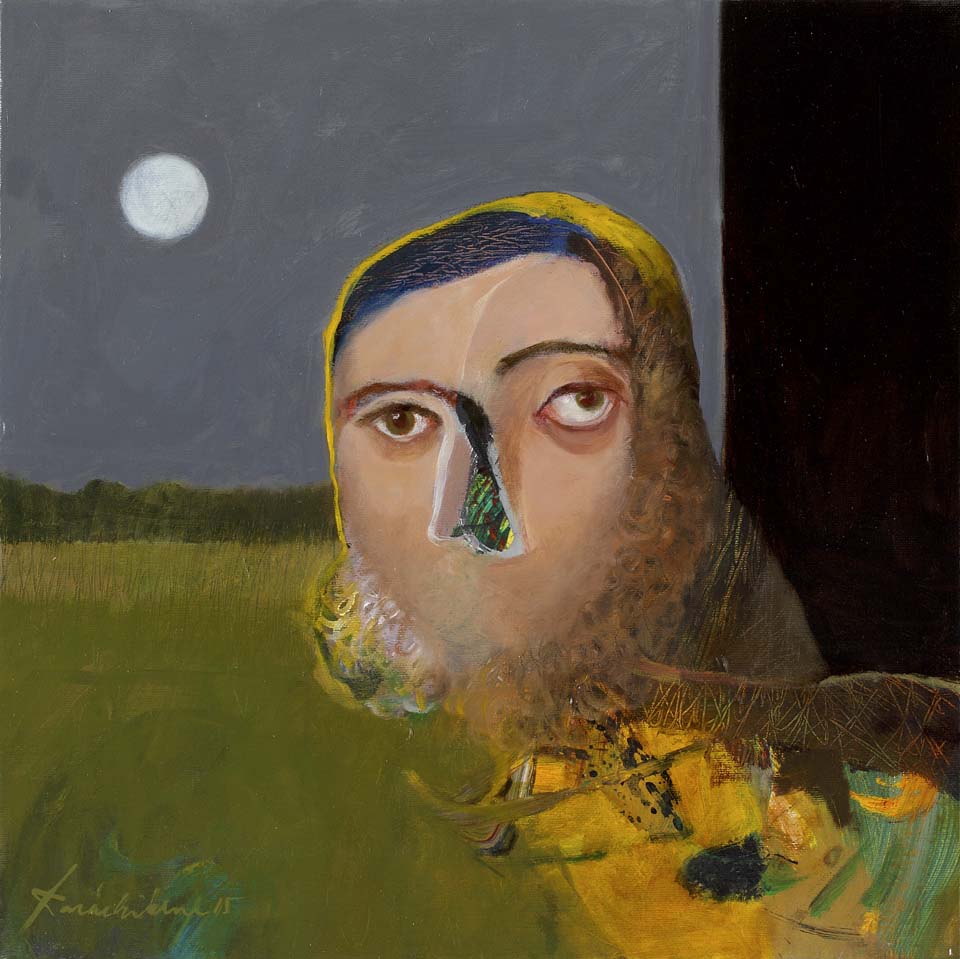 Viewing HalimKarabibene’s work is a fun experience. Densely populated with peculiar little people, his paintings offer much to discover. Nude or dressedonly in underwear tout le monde celebrates: “La vie est une fête.” Wine bottles, colorful balloons, topless women in raffia skirts and the lute are recurring accessories. It is a reminiscent of the oeuvres of Hieronymus Bosch or more recently produced works like those of the British enfantsterribles, the Chapman brothers or the Indian- born Raqib Shaw. For them art seems to be a laboratory, a playground or an outlet for weird fantasies. Karabibene is perhaps a touch less rampant, less debauched, less shocking than his British contemporaries. One’s initial joyful impression is however undermined by the realization that some protagonists have chopped off limbs, screws in their joints and a wind-up-key in their skull. Like broken dummies or sinister Frankenstein creatures they leave a sour aftertaste. Strange creatures, half-human half-animal, variations of the Islamic Al buraq, animals with mysterious personae, like the cats and the donkey mingle with the celebrating crowd.

The artist is obviously well versed in the European art history as one can recognize the stylistic influences of Pablo Picasso (faces in direct and profile view), of George Barque (Cubism), of René Magritte (floating umbrellas) and of Francis Bacon (grotesque body mutations) etc. Karabibene, whose first name ‘Halim’ means the ‘dream’ in Arabic, reveals that what he shows us, is his “personal universe”. The vocabulary derives either from his unconscious, childhood memories or simply from everyday objects in his immediate surroundings.
Most of the settings are placed either in Karabibene’s hometown Bizerte, the beautiful old harbor town in the North of Tunisia or in the more chic seaside resort La Marsa near the capital, where his atelier is currently located. We see the typical Maghreb architecture, the picturesque bays, often defined by red white striped lighthouses. There are crowded beaches, much bare skin, boats and fish.

Only the Sheshia (traditional red cap) and the Islamic crescent on top of three globes, both remnants of the Ottoman Turkish invasion in the sixteenth century, remind one of the actual cultural backgrounds of the scene of frolic.
The artist is queried as to whether his paintings mirror the illicit spin-offs of society and if there are hidden socio-political criticisms, a wagging finger, like that we know it from Hieronymus Bosch. He quickly waves this thought off and dismisses this idea in his typical whimsical way with a wave of his hand and a twinkle in his eye.